Hello! I congratulate all readers of my reviews with good profit. Let me start this review with happy news: a celebration of the first anniversary of the Aunite Group’s presence in the German market. The news is especially interesting for those who have the opportunity to get to the German city of Paderborn. There, at the Hubertusklause Hotel, the corporation is running the celebration event on November 23 — 24. If you are considering to attend it, please find out the details are on the company website.
The second news is about the Aunit Rally contest. Purchases of the token reached 75000000 units and a new prize, iPhone X, becomes available as per the contest rules. In addition, the next two weeks, the company will give away the gift sets from the Academy of Beauty and Health.
And finally, the most influential news for traders: the launch of a trading robot on the VPS server. It is a very convenient thing that solves a lot of tasks for a trader, starting with a lack of time and ending with the psychological aspects of trading. Thanks to this, trading volumes will definitely grow, followed by a new bull trend that has emerged a little earlier. However, let me comment on the trend in the following part of the review. 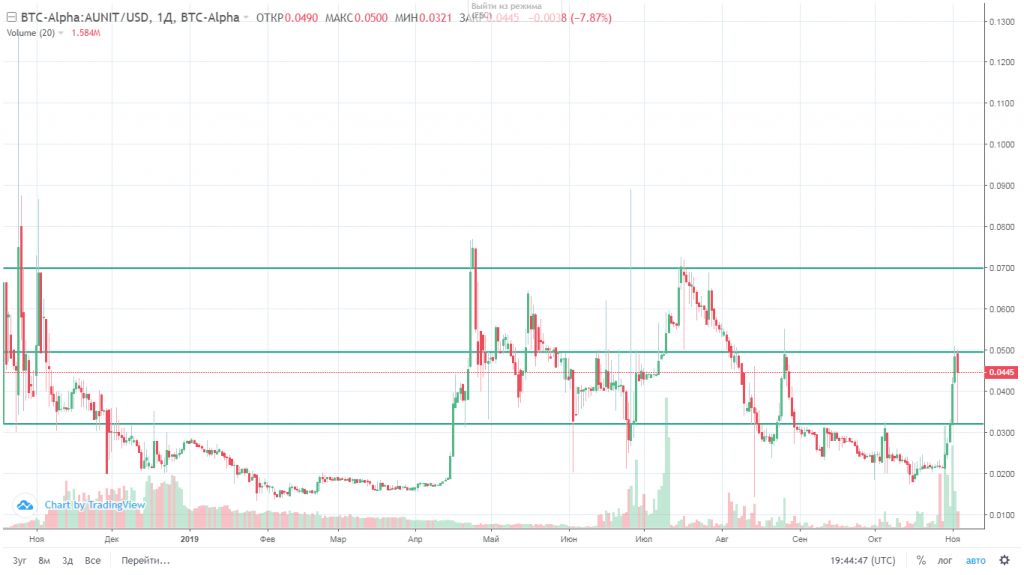 The level of 0.0500 has been formed having the previous High as closing price if not 0.0550. It will be resolved a few days later by a correction or a rebound. I should immediately point out here that there was only a rebound from the resistance of 0.0500, without a reversal and without a stop. At the moment, the trend may continue further and the market will only get a candle with a big shadow. It may be followed by a slow or fast reversal with the price returning to support 0.0320. Actually, the second option will be a good Buy option allowing us to repeat the trade with the target 0.0500. Here, we are still waiting. It is not worth completely leaving the token, and here we go from the third line to 0.0700.
The token has been within the resistance area ​​0.0700 for a very long time, so going there immediately after correction in the area of ​​0.0500 — 0.0550 is not the thing to do. To enable an uptrend, players should get used to 0.0500, unless someone with big money decides to buy very oversold Aunit tokens.

The situation against Bitcoin is similar to the previous cryptocurrency pair. There is a slight increase in trading volumes, which is not surprising. The cryptocurrency pair left the flat range to reach 0.00000550 as the first target. Further, the situation will develop around the resistance 0.00000550. One option for the rate is to roll back to the previous support 0.00000222. This option will give a good chance for new purchases. Another option is to break through resistance 0.00000550 and develop to the next target of 0.00000760. A breakthrough can be both quick after correction or rollback. If you bought Aunit for bitcoins around 0.00000200, it makes sense to take a certain amount of profit in case of a rollback. We leave the other part for the case of continued growth. 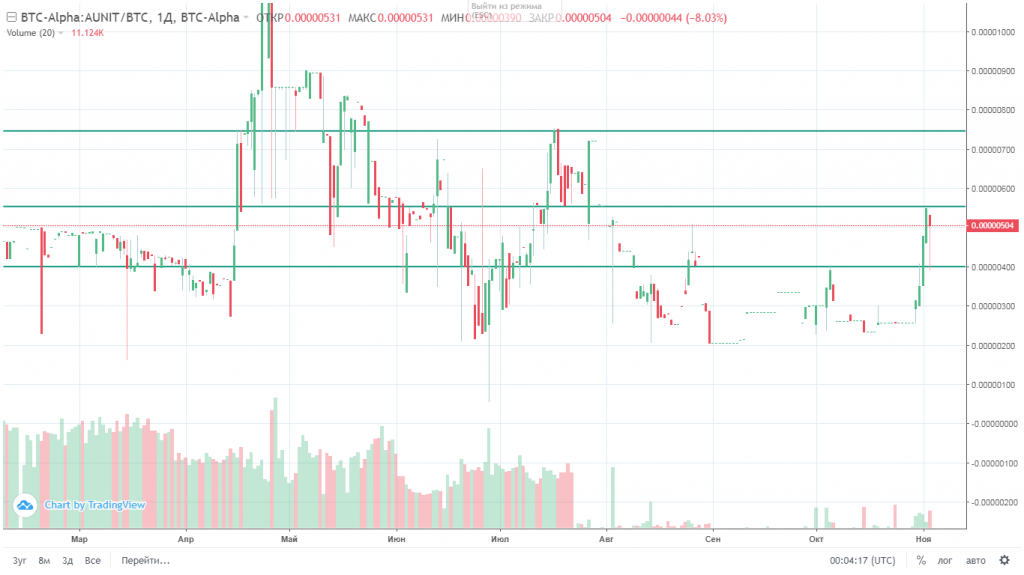 Aunit against Ethereum pair remains the least popular pair. However, it provides good opportunities for trading. Of course, low volumes mean big breaks and long pauses, but you can work here. Previously, I recommended to buy in the support area ​​0.000100 and go to ​​0.000250. Actually this trade occurred, and if you had a deal there, it worked out. Further, it will be inconvenient to work on this tool due to low activity and due to the fact that the rate is far from the support 0.000100. If there is a rollback to 0.000120 –0.000100, you can buy the token again, of course, with pending orders. As for the breakthrough of resistance 0.000250 and workout to 0.000390, problems begin here. If you want to work within this range ought to wait until the movement is not lower than 0.000340. After that, you can place a pending buy order around 0,000250 and leave the resource to buy in case of a stronger rollback.

Good luck to everyone, bye!