Hello, I’ll start this review with positive news regarding the Aunit Rally. The trading volume on the BTC-Alfa exchange with the Aunit token exceeded the milestone of 150 million tokens. According to the campaign rules, this volume makes participants eligible for such prizes as iPhone X and MacBook Pro. Both prizes will be awarded on December 11th. The rally is open to all users who buy the amount from 1000 AUNIT tokens and hold these tokens on their account on the BTC-Alpha exchange during the rally. More information can be found on the website. There is not much left until the end of the contest. There is a chance that the Aunit token will grow due to the coming final of the rally because traders need to get prepared for a surge in activity and not miss this movement.
The second news of the past week speaking about the company’s activity, is the “Union Day”, held on November 30. It proves that the company is developing, open to communication, which positively impacts on all assets, including the Aunit token.
The latest news that I would like to touch on is a belated “Black Friday”. As always, in addition to good discounts, buyers could save money with a good cashback, which strengthens the position of the Aunit Group as well. In addition, more stores have joined the company the last week, including the stores from Russia, Ukraine and other countries, totaling in about 40 stores.

From a technical point of view, the situation is very interesting. The last upward movement provided us with the rate 0.0380 and rolled down. I wrote about this movement in a previous review and recommended to buy on a breakout of 0.0380 — 0.04 or a pullback 0.03. Having slightly adjusted my recommendation to the current situation, you can buy a rollback to 0.0320, or in fact, buy from the market at the time of writing.
If the support 0.0320 works, which is very likely, then we can take the profit partially at 0.0380. 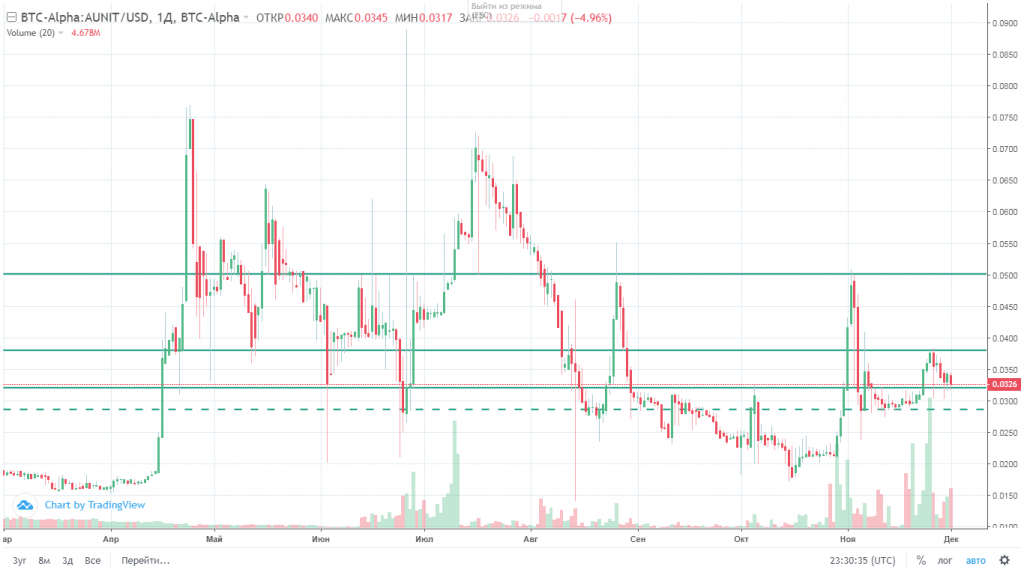 As for the possibility of a rebound from the support 0.0320, let me note that the correction has stopped for now. This correction may become a double bottom reversal, and may also become a flag correction. If there is a flag, support 0.0250 will be either test, or the price will take an attempt to go there.
As a result, the price can receive a quick rebound from the support 0.0320 further going to 0.0380 or taking a real or false breakthrough of the support of 0.0320 with the same scenario.
Given the proximity of the two support lines and a very interesting target around 0.0500, it makes sense to buy a little amount of Aunit token against the US dollar. Thus, you can make part of the purchases around 0.0320 and part at 0.0270 and 0.0250. We also exit partially at 0.0380, 0.0500 and leave a little amount of tokens if the price grows to these targets.

Here is an interesting situation on this cryptocurrency pair. As I previously assumed, as soon as traders get disappointed with Bitcoin one more time and traders think about the risks and potential profit from Bitcoin, some of the players will turn to other assets, including Aunit. There are several reasons for this, including reliability of the company issuing the Aunit token. This behavior of the players will push the Aunit token rate against Bitcoin up, which, in fact, has happened as we monitor quite a strong growth and development to the resistance 0.00000550. The rollback has followed this movement, which was not surprisingly, and as a result, traders at the have recorded a profit at resistance. 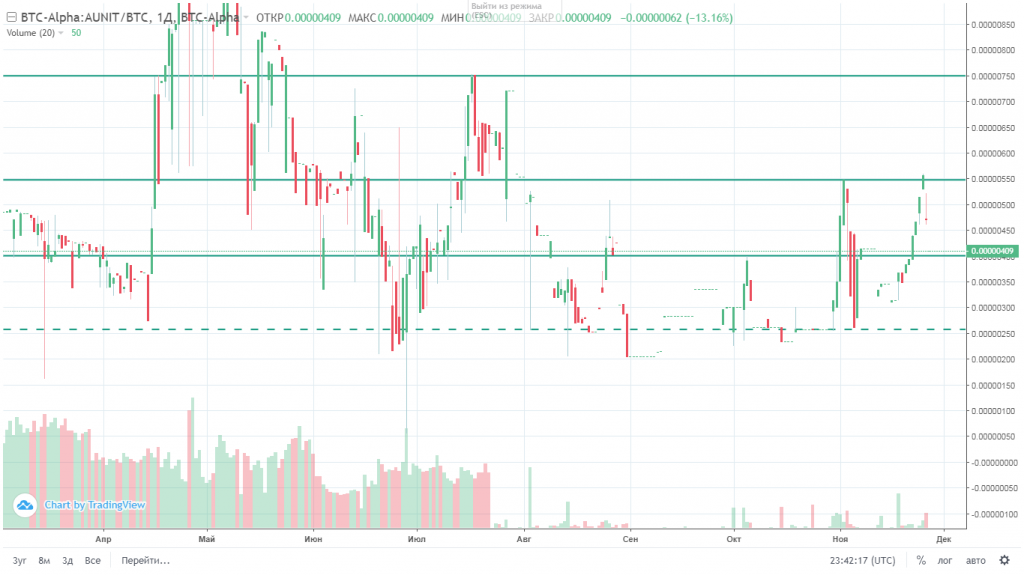 Further behavior will depend on the magnitude of the rebound. If we the price gets back to the resistance 0.00000550 and start testing it, it will make sense to get ready to buy on this breakthrough, but we need a local flag and good local resistance. The option with a deeper rollback already implies buying on rebounds from support lines 00000400 and 0.00000250, unless, of course, the rate goes there again. If we buy on a breakthrough of 0.00000550, we can focus on the target 0.00000750 and above. Also, a lot of factors depend on the current Bitcoin sentiment.

It is difficult to work on this tool due to low activity, but nevertheless, this cryptocurrency pair has reached a local resistance of 0.000273. On the technical side, a breakthrough of this resistance opens the next target to 0.000390 — 0.000400, the only question is the breakthrough and possibility to identify it on time. 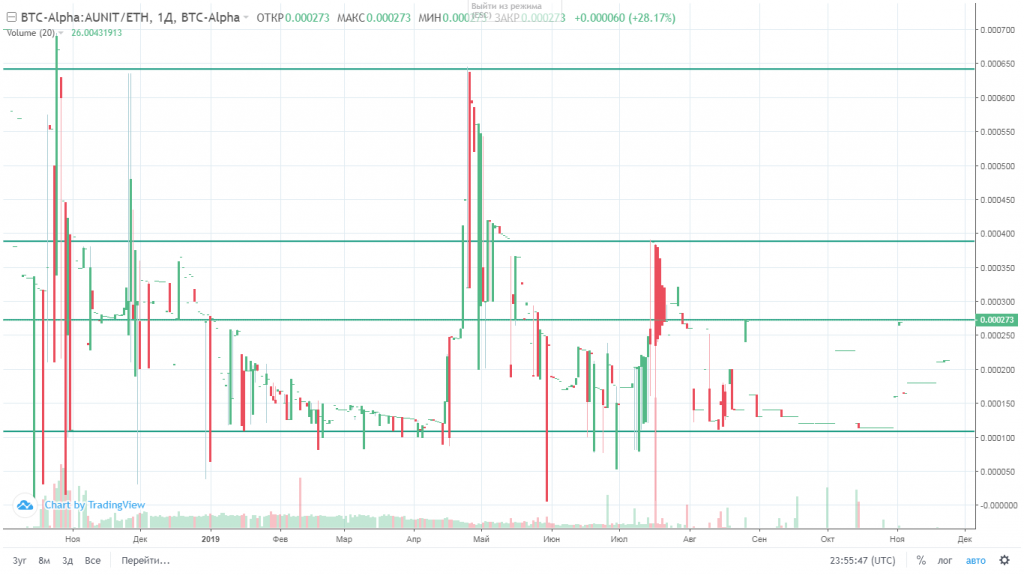 Those who are not focused on short-term transactions can buy the token partially here, although not far from the resistance, and average the transactions in case of a rollback. Growth of this cryptocurrency pair will be decided at the time of a strong disappointment in bitcoin and other popular and still very expensive coins.

Good luck to everyone, bye.